In a January 26, 2015 bulletin, the Department of Justice published information pertaining to a court case involving the use of service animals and the ADA. This particular case involves a student using a service animal in a public school (Alboniga v School Board of Broward County). There are broader implications in other Title II facilities addressed here, however. The legal brief asserts the statement in 28 C.F.R. 35.136(a), that, “[g]enerally, a public entity shall modify its policies, practices, or procedures to permit the use of a service animal by an individual with a disability,” cannot be overruled if an entity feels that it is providing “reasonable accommodations” instead. This means that, even though Title II of the ADA does not explicitly address service animals nor has Congress spoken on the issue, Title II (and Title III) entities must honor an individual’s choice to be with a service animal in all areas of community life.

The bulletin highlights the ADA’s goals of maintaining the autonomy of individuals with disabilities as they are integrated into society. That is why an individual is not to be separated from his or her service animal by any policy or procedure when, “in all areas of a public entity’s facilities where members of the public, participants in services, programs or activities, or invitees . . . are allowed to go” (§ 35.136(g)); and the general prohibition against requiring individuals who use service animals to pay a surcharge or to comply with requirements generally not applicable to people without pets (§ 35.136(h)). “ Worth noting is that the service animal is not a pet – it is a dog trained to , “do work or perform tasks for the benefit of an individual with a disability.” The definition of a service animal can be found at 28 C.F.R. 35.104.

Practicality is shown in detailing instances of when a service animal may not be permitted. Examples are given in 28 C.F.R. 35.104 at 600 which states that, “a public entity need not allow an individual to use his service animal if it would fundamentally alter the nature of the entity’s service, program, or activity, or if it would pose a direct threat to the health or safety of others.” There was an example in 2014 of a service animal that became nauseous on a long airplane flight; the plane landed and the animal and its owner had to disembark. The health and safety of the other airline passengers were in jeopardy. The animal being out of control and not being “housebroken” are other reasons to exclude the animal.

The brief’s summation is that no matter what accommodations have been put in place, an entity cannot separate an individual with disabilities from his or her service animal. The basic premise of the Americans with Disabilities Act (ADA) is to allow all individuals with disabilities to make choices for themselves and to be mainstreamed into society. 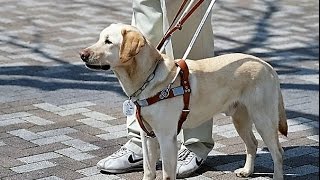 Service Animals... Revisited by the ADA

Social interaction is vital at any age.